Diaries from the Desert, Part 1

Years ago, our bright and talented (okay, so I’m biased) son decided that he was tired of college and wanted to do something “real” for a change. So he joined the Army. For a little background you may want to read my article about JB and basic training, “Diary of a New Recruit.”

After a year, JB was deployed to Kuwait. He wrote home when he could, and I thought I’d share some of his letters with you. When I start to complain about the heat, I think of JB and the thousands of others in the military stationed in faraway places in less than ideal conditions. I am blessed that so many are willing to make sacrifices for their country, and I am proud that JB is one of them. Thank God for our military! 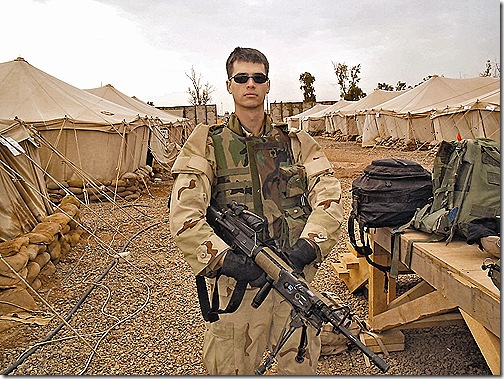 I’m in Kuwait! It is incredible. Already I have gone from “Whoa, this is awesome!” to “One more day of this and I’m killing myself!” and back again. Let me start from the beginning.

It all started first thing Sunday morning back at Ft. Benning. I was tired and not really in a “Let’s Deploy!” mood. But I staggered out of bed and dragged all 155 pounds of gear (my body weight, incidentally) to the company area. Even though we had already stowed duffle bags and rucksacks, I still had 60 pounds of junk to wear. [Editor’s Note: I wonder how much of that weight was his books?]

The plane was a Boeing 777. Talk about unbelievably cool! Each seat had a built-in TV and remote. It had three columns of three seats each, plus first class. It would have been very pleasant had there been no soldiers on it.

The flight was very long and messed with our heads. Between sleeping at odd times, the 7-hour time change, 15 hours of flight, and 3 hours of delays, I was thoroughly messed up by the time we got in the country. We arrived in Kuwait International Airport at about 1730 local time. It was my first experience with time travel. It was strangely anticlimactic. Of course, 7 hours isn’t exactly a huge time leap.

We get off the planes right onto busses. There are lines of hedges, trees (palms and short bushy ones), and grass! So far Kuwait is mocking my expectations. Board busses. Sleep. Exacerbate already bad jet lag.

1930. Not the year. We only traveled in time for 7 hours, remember? We arrive at Camp Doha.

Serious whoa. Warehouses. Military vehicles everywhere. Not as hot as I expected. [Editor’s note: Yet.] Nice breeze. Smells like that little beach by Grandma’s house.

Briefing received. Lots of clichés and militarisms. Got it. We’ve heard this all before.

We are shown to our vehicles. Mine has two serious problems. Number one, my cooling fan rotates about as quickly as, as, something notorious for revolving slowly. The Earth maybe.

But most worrisome is my engine access hatch. This is a hydraulic lift cover that raises to expose the engine components. Mine takes about 15 seconds to open and 7.5 minutes to close. Already I’m having visions:

“Tick…tick…tick…” says the hatch, moving so slowly it is unobservable to the naked eye.

“Yeah, tell the Lt. we’re gonna be about 7.5 minutes behind them,” says PFC Hogan.

“Darn! Well, Hogan. We’re gonna have to rely on your ‘Powers in the Force’ to push those shells away.”

So, I’m not exactly thrilled with Bravo 13 right now. But I finish my vehicle PMCS and PLUT. We receive BII, SKO, ask about PLL, and are denied CRTT. After LNTT the TCs set up our SP, and we are almost done. (Bonus game: Guess which acronyms I totally made up!)

From Basic to Baghdad is a compilation of letters and emails that J.B. Hogan sent home to his family detailing his experience in the Army. Available at Bright Ideas Press.

Diary of a New Recruit
Diaries from the Desert, Part 2